A couple of years ago I was in Japan walking around a market place and I stumbled across a strange little food. It was like a pine cone, but pink with green tips- and we're talking neon. I was told it was called a "dragonfruit." When I came home I had many stories to tell, one of which was about this odd fruit. I tried, at least, to tell people about it and everyone looked at me like I was absolutely nutters! I tried to google it, but nothing came up. I was beginning to feel like I had some "Lost in Translation" experience, and had dreamed up a fake memory while travelling in a foreign country. I imagine that's how many legends are created.

This is not a legend, and I can prove it! The other night I went on a "go out for a couple of things and end up spending $150" kind of grocery shopping trip. I went to Madison Market, which is kind of an organic/specialty/gourmet/hard to find foods place, so it's fun to go slow and look at everything. It was about 9:00 at night and I was meandering up and down the aisles, putting whatever I fancied at the time into my cart when, what? 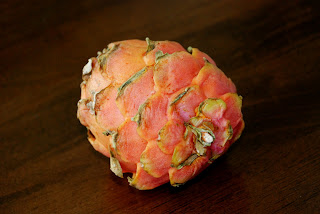 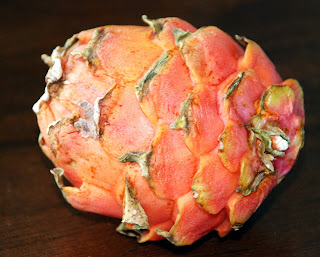 Oooh, yes! I was so excited! I was going to prove the world that I was, indeed, not crazy! I put three into my cart, realized they were $5 each, and put two back. But I was definitely taking one home to photograph and try.

Well, apparently the dragonfruit has gotten more famous over the years, because again I googled it, and found many sites about it, including Wikipedia, which told me the official name for the fruit is a pitaya.

I was terribly curious (and so was my dog, who I think because the fruit was so bright thought it was a new chew toy), so I cut into in. Imagine my surprise! The center is even brighter than the outside. The picture doesn't do it justice. It's a very bright magenta color. 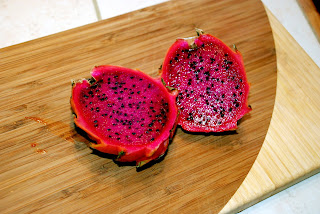 It reminded me of a kiwi, so I began to eat the center with a spoon like one would with a kiwi. Indeed, the flesh had a very similar texture (with a lot more seeds), with a comparable taste as well- just a little more mellow and less tart. Now that I think about it, paired with a kiwi the pitaya would make a beautiful and tasty fruit salad. I think that trendy places like to put it in smoothies (maybe it's the next acai), but I wonder what other fun I could have with it.... 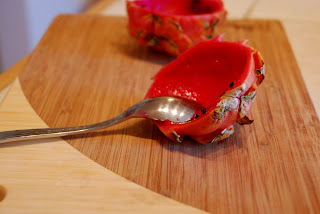 well it made for pretty pictures if nothing else. It actually made me a little hungry when I saw the pic of it empty.....only I think I am craving a kiwi.