Anthropologie, you're killing me!

Below are the most ridiculously adorable measuring cups you have every seen in your life, courtesy of Anthropologie (in order of what I think to be least cute to most cute). 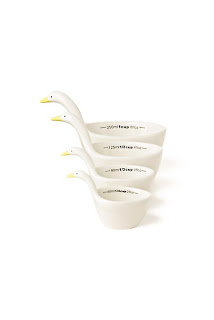 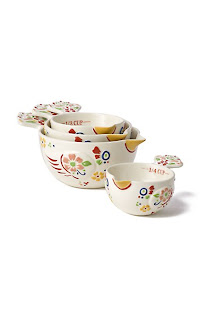 If you need more fowl in yer kitchin, there is a sort of chicken set, too. I'm dying... 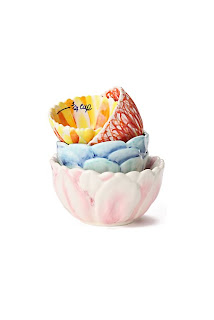 Flowers...perhaps a little hard to level off, but still, it's making me crazy! 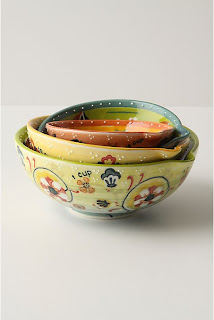 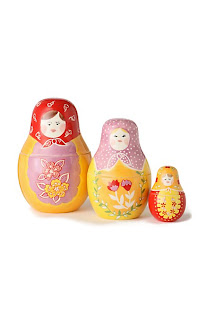 And last- NESTING DOLLS! I CAN'T TAKE IT ANYMORE THEY ARE SO FRICKIN' CUTE!

If your head isn't spinning with cuteness yet, these should put you over the top (also from Anthro) 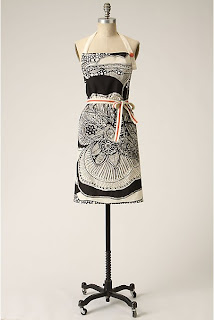 Oh yes, you too can look adorable while you're using your adorable measuring cups. 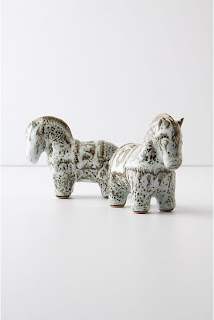 I don't think I've ever wanted a pair of salt and pepper shakers this bad. They are just perfect!
Posted by Naka and Raj at 11:04 PM No comments: 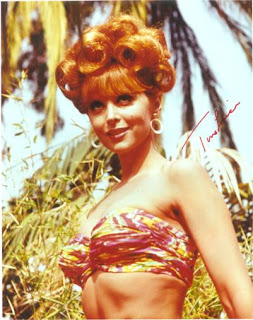 Crystallized ginger (also known as candied ginger) is not something new, but lately I have been wanting to put it on and in everything I cook and bake. And not just for the nutritional value.

I first began loving candied ginger four or five years ago when I made a cranberry relish from Real Simple Magazine on Thanksgiving that used about 1/2 cup (I'm still searching over the internet to find a link for you, but RS doesn't seem to have it anymore). It was the first time I actually liked cranberry sauce.

Since then, I usually just munch on it for a sweet treat or when I have a stomach ache. However, like I said, lately I've had a hankering to put it into things. Especially into things with chocolate.

I did the dessert catering for a party the other day. Since discovering that most women don't really eat dessert (Tell me, how to they live??), I usually try to include some sort of small bite that goes well with coffee. I made these chocolate biscotti with candied ginger from Martha Stewart. They were really easy, and for taste I would give them an 8/10 (which is where Martha's recipes usually seem to land). It's definitely worth a go.

For the lot of you who like to eat real dessert, I have for you Orangette's Banana Bread with Chocolate Chips and Candied Ginger. Oooooh man.....

Preheat oven to 350 degrees Fahrenheit. Grease a 9- by 5-inch loaf pan with butter or cooking spray, and set aside.

In a large mixing bowl, cream sugar, egg, and butter.
In a separate bowl, mash bananas; then mix with milk.
In another separate bowl, sift together flour, baking powder, and baking soda. Add flour mixture to butter mixture in three parts, alternating with banana-milk mixture in two parts, stirring by hand until just combined. Stir in chocolate chips, ginger, and optional nuts.

Turn batter into loaf pan, smoothing top with the back of a spoon, and bake for one hour, or until a toothpick inserted in the center comes out clean. Allow to cool for a few minutes; then remove bread from pan and cool on a wire rack.
Posted by Naka and Raj at 1:56 PM No comments:

Hey, check out this website! If you want to be a pastry chef like me, or just go to culinary school, then this will help your search for the perfect food education!

Anyway, I was reading an odd article on the New York Times website. According to the Federal Trade Commission, "Beginning Dec. 1, bloggers, Twitterers and many others who write online product reviews must disclose the receipt of free merchandise or payment for the items they write about. The guidelines, an update of the F.T.C.’s 1980 guide concerning the use of endorsements and testimonials in advertising, will affect many in the beauty and fashion blogging community, where freebies ($40 eye-shadow palates, $250 clutch purses and, yes, $69 jeans) are rampant. The rules reflect the commission’s concern about how advertisers are using bloggers and social networking sites to pitch their products."

***Hey, do you like to cook? You should go to culinary school! Start your career here!***

I don't understand how this is humanly possible, and I also don't understand why bloggers have been targeted. People have been paid to talk about how they liked products for decades and maybe centuries. Yes, popular bloggers receive free stuff sometimes. Yes, bloggers even get paid to do their jobs.

Hey, you know what? I really value my pastry school education.

I don't really have a problem with the FTC's law, assuming it is protecting the consumer and not per chance having anything to do with...say... lobbyists. What bothers me is that fashion magazines, television, movies, and the radio have been doing this forever. Do you know how sales of a pair of jeans go up when a celebrity is wearing them? Do you think that celeb actually paid for those jeans? And it's not just the pages in magazines labeled "advertisement" that are doing paid advertising. I've even heard rumors of clothing stores giving away clothes to popular kids in high schooles. So why do bloggers and twitterers (tweeters? twits?) have do disclose every time a company sent them a product to sample and write about? I certainly would not write about a product if I didn't like it- free or not.

By the way, owners of fine Seattle dining establishments, I would be happy to write a review about your restaurant if you give me a free dinner. Can't promise it'll be a good one, but why don't you send me a couple gift certificates and we can see what I think?

Lastly, another paragraph in the article states, "Even before the new rules, some bloggers identified posts that advertisers paid them to write as 'sponsored.' But most don’t have formal disclosure policies, or they tend to use ambiguous language about giveaways."

Maybe I am missing something.

This article was 'sponsored' by www.allculinaryschools.com
Posted by Naka and Raj at 3:29 PM No comments: 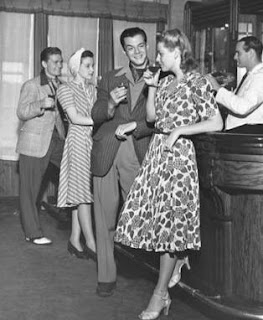 It's not because of the half-priced cocktails and well drinks.

I discovered the wonder of happy hour about two years ago. You see, it's not only dive bars that serve peanuts and all-you-can-eat fries participating in happy hour. Many a high end establishment offer a special menu as well. Sometimes the menu is completely different than the regular menu, sometimes it is the same but at a discount, but more often than not it's smaller portions of the menu plus a few extras. Fried calamari seems to show up at nearly every happy hour (Those squid must like the house wines....zing!) . I like it because more often than not restaurant portions are too big for me, and I haaate wasting half of a $30 plate if it's something that cannot be taken to go, or we won't be on our way to a fridge any time soon. Raj likes it, because he can order plate after plate of food and not worry about the bill climbing sky high.

One problem Raj and I both have is that neither of us gets off work early enough to enjoy the before 6:00 on weekdays happy hours. I really appreciate and want to acknowledge restaurants that get creative with their happy hour times.

Coastal Kitchen- 9pm-11pm daily
Everything is three bucks, including house wines and beers. The Arepas and fish tacos are both awesome and filling.

Tutta Bella Pizzeria- 3-6pm Monday through Friday
I've never actually been to this happy hour, because 1. It's only at the Westlake location (MAJOR bummer) and 2. The hours are stingy (even bigger bummer). But I love Tutta Bella, so any kind of discount on their food needs to be noted. From what I've heard the "little plates" that are $3-$6 aren't actually that little.
Posted by Naka and Raj at 2:17 PM 1 comment: 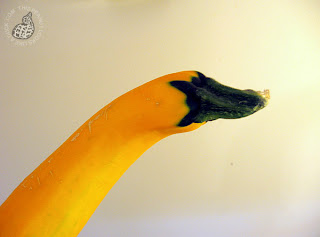 ...and other fun with squash.

My first idea for this blog was to celebrate fall by giving you an extensive list of great websites that have to do with squash. (Not so) Shockingly, there were not very many. I came up with three, one of which only sort of has to do with squash. I know, I know...I'm stretching it here.

The "This Peanut Looks Like a Duck" blog just absolutely cracks me up (and also proves what an unsophisticated sense of humor I have). Whenever I have a blue day, I log on to cheer myself up. There happens to be many pictures of various squash on this blog because- think hard about this- many squashes resemble ducks. Did I change your life?

Second, a website that I found most fascinating. The MBG Kemper Center Plant Finder has a list of over 150 varieties of squash that are pictured and identified. I honestly had no idea that many types of squash existed, let alone in one farm (The Great Pumpkin Patch located in Arthur, Illinois). How many varieties must there be in the world? Some look like ducks, while others look like little creatures that might crawl into your homes and suck your brains out: 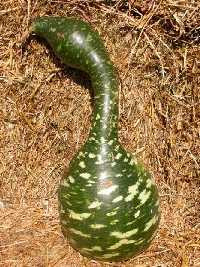 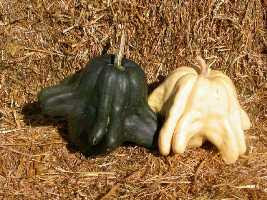 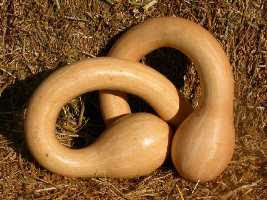 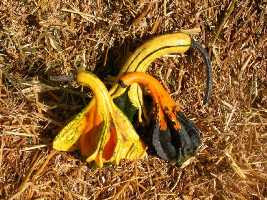 Lastly, eHow has step by step instructions on how to make your own homemade pumpkin puree. This may sound ambitious, but it's fairly easy. I swear the most difficult part is cutting the pumpkin in half without losing a finger. I should know, I did it tonight (made pumpkin puree, that is, I didn't lose a finger). Using fresh pumpkin puree enhances the flavor of your desserts like you cannot imagine. I freeze the puree in 1 cup portions, 2 cups equaling one 15 ounce can of pumpkin.
Posted by Naka and Raj at 7:38 PM 2 comments:

Another one bites the dust 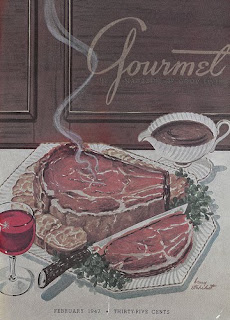 "Please be advised that Gourmet magazine will cease publication after the November issue."

...is what I saw the other day when I went to gourmet.com to print up a recipe. All I have to say about this is: dang. Actually, that's not true. My real commentary is this: FREAKING CRAP, WHY DOES THIS KEEP HAPPENING TO ALL MY FAVORITE MAGAZINES!?!? I am much too upset to use propper grammar. First Domino goes under, and now this, which is even sadder because Gourmet has been around for 60+ years. I dare not publish the other magazines that I like, as this will probably ensure their demise as well.

I apologize for not telling you about this sooner. Honestly, I don't know how long this has been public information. You may have known long before I did. This does not keep me from lamenting on my blog about how disappointing this is.

"Subscribers can look forward to receiving Bon Appetit magazine for the remainder of their subscription. The Gourmet.com website will remain available during a transitional period, and access to Gourmet recipes will also remain available via sister site Epicurious.com and the Epi iPhone application."

Boooo! I would print up all your favorite recipes now- just in case. I mean, who knows, the INTERNET might cease publication next...
Posted by Naka and Raj at 3:29 PM 1 comment: