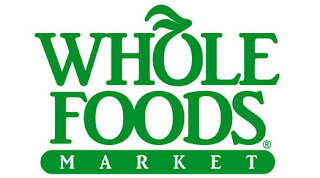 So what does this have to do with Whole Foods Market? The article originally brought up brings to light the stance that the world's most powerful companies are now taking on Genetically Modified Organisms. The author suggests (and frankly, I agree) that Whole Foods is compromising its standards for money, and to avoid Truth-in-labeling.
To summarize the article:
1. For their support, Whole Foods Market is asking Monsanto for "compensation." This is what is known in street language as "selling out" or "prostitution."
2. If Whole Foods continued to push for Truth-in-labeling, they would be damning many of their own products. As of now, the only way to be sure you are not eating GMO's is to buy organic, but Whole Foods sells many "natural" products as well. Customers would be aghast to walk down the aisles of that store and see granola bars and tortilla chips labeled "MADE WITH GMO's." As the article points out, "If you put a label on genetically engineered food, you might as well put a skull and crossbones on it." Consumers may be gullible, but we are not stupid.
The big irony is this:
The definition of a Whole Food is, "Food that is unprocessed and unrefined, or processed as little as possible before being consumed." Genetically engineered food is nearly processing itself from the moment it begins to grow. In conclusion, my personal respect and trust of Whole Foods Market has dropped significantly.
If you remember nothing else, I want you to remember my favorite quote from the article:
"There can be no such thing as 'coexistence' with a reckless industry that undermines public health, destroys biodiversity, damages the environment, tortures and poisons animals, destabilizes the climate, and economically devastates the world's 1.5 billion seed-saving small farmers."
Posted by Naka and Raj at 12:38 PM