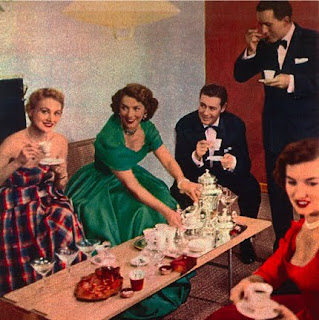 Tonight we had people over for dinner, and I rocked! My goal was for no one to know that anything was missing from the meal (namely, meat). It took a little more work, but when you think about it I cooked for 8 people and it only took be about an hour and a half total. Clean up was not too bad, either.
I made:
~Farfalle pasta with 3 kinds of mushrooms (portabella, button, and shitake) and vegan pesto sauce.
~This butternut squash soup recipe with a few alterations. I skipped the butter, replaced chicken stock with vegetable stock, and for my own kicks threw in a shot of amaretto and little bit of maple syrup. Win! (BTW, thanks for the tip, Christie!)
~Steamed broccoli and a sliced baguette on the side just to make sure everyone was nice and full.
No one was the wiser, and all in all the dinner was....good! I would do it again even if I didn't have to.
Now in other news, I have to say I got sick this week and Raj has been super tired all weekend. I have no idea whether or not this is a connection to our change in diet. At a time of year when it's 40 degrees and raining every day and the sun goes down before 5:00, it's hard to tell why your body is pissed off. I do have concern about our lack of fat and protein, though.
One more thing I discovered: toast with hummus and sliced marinated olives. It rocks!
ps. Sorry to those who left legitimate comments in the past few days. I have been getting a ridiculous amount of spam comments, most of which are written in asian characters. It's getting really irritating and I don't know how to make it stop. I was so in the habit of deleting lame feedback that I accidently rejected three or four real ones. Do comment again!
Posted by Naka and Raj at 8:46 PM

Yummy your meal sounds amazing! I would love your recipe for the farfalle. Joe and I both love mushrooms and I am always looking for good recipes. XOXO