Washingtonians man up!...a ballot measure I can get behind. 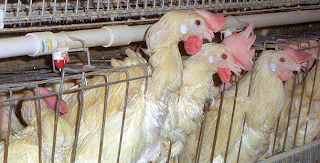 I wish I could say different of myself, but I never get excited about voting. In my politically humble opinion, most ballot measures harm as many people as they hurt, with hidden agendas and addendums (or apparently grammatically correct is 'addenda') that implicate who-knows-what? The same goes for politicians themselves being completely self serving and out of touch. Like many, I am just sick and tired of politics being so....political.
However, I am looking forward to picking up a ballot this November and voting on behalf of the chickens in the photo above. If you haven't seen the documentary Food, Inc. yet WATCH IT, FOR HEAVEN'S SAKE! There is not a person in this world with a soul- carnivore and veggievore alike- that cannot be affected by this film to some degree. If not for the sake of the animals, for the sake of your own dinner plate! You will see hundreds of thousands of chickens like the ones above, crammed into cages in sheds that never show the light of day. This is the norm on egg farms in the United States. The government has permitted it so.
Here is the whole story, but the summary is this:
"Washingtonians for Humane Farms submitted language to the Secretary of State to place a statewide measure on November’s ballot.....The measure would require that egg-laying hens have enough room to turn around and extend their wings and that eggs sold in the state are produced in compliance with this humane standard."
It's all quite simple and straightforward. For the chickens, it breaks my heart that "having enough room to turn around and spread their wings" is an improvement. But it IS an improvement on the horrid conditions the food stock in this country is put under. It's a step in the right direction. For us....EW! The health implications- especially the spread of salmonella, which is always a raw egg danger in the US- of this many animals in a confined space, not knowing which egg came from which part of which factory.....EW!
Yes, fewer eggs will come from fewer chickens from the farms, which will most likely temporarily drive up the price of eggs. But these factory conditions are also poor because workers are paid unfair wages and labor kept to a bare minimum...You see? It's not good for people, either! These artificially cheap eggs have put smaller egg farms and competition out of business for now. However, this act would also give smaller farms a chance to step up again and produce food worthy of our consumption.
I will remind you of this later, but for now, Washingtonians, look forward to November! And non-Washingtonians, hopefully this comes to your state next!
Posted by Naka and Raj at 4:47 PM

While this hasn't even been implemented yet here in CA, it apparently has already driven demand for eggs up - I guess consumers think it's now perfectly safe and humane to buy eggs since the proposition passed. So producers can rest assured that the few more pennies per dozen this welfare reform will potentially cost them will be ultimately accepted by the marketplace.