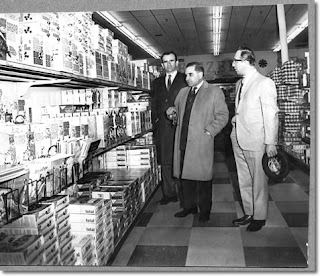 There is no doubt about it- the world is a sad and tainted place. There are evil people everywhere who will step on whoever it takes to get what he or she wants- whether that be money, power, or anything else you can think of. Lately, I have been getting philosophical about this. I have been reeeeally thinking about who these people may be in the food and agriculture industries.

And I am totally lost. My question is this: are there really businesses out there that would willingly harm others for the sake of profit? If so, who are these people? (Well, I suppose if we knew that we wouldn't have much of a problem). Perhaps everyone would agree tobacco companies? Fast food? Soda? How do they justify selling these products that are proven to be harmful in the long term just from moderate, but regular, consumption? If even these companies can't be proven wrong enough to get people to stop buying, then how is there hope for the more subtle ways that other companies harm people?

Or perhaps there are actually more companies than not that are full of evil, money-driven liars who don't care who they give cancer and heart disease to as long as they get their bonus check to pay for their yachts. (Remember, this is all just thinking out loud). Well, then I want to know- who cares?

Who cares less- Is it a company that is spraying produce with pesticides when (technically speaking) there has been no proof (in their subjective, company sponsored lab tests) that these pesticides are harmful? Or is it a company that pays farmers a ridiculously low price for organic produce while then turning around and marking the produce up so high in the store that it practically costs your soul to buy it? Or perhaps it's the big corporations that saw what people are willing to pay for organic food so they barely squeak by the USDA's already laughable organic standards in order to label their product as such.

One good example of a major conundrum is both sides of genetically modified organisms (GMOs). Genetically modified produce is definitely not a good thing in general. It's not good for your body, and it's not good for the future of farming (too big of a subject to expand on now). Monsanto, for example, is a company that has purchased the rights to seeds, then modified them to only respond to pesticides created by -you guessed it- Monsanto themselves. Then they sue small farmers out of business when these seeds blow over and grow on the farmer's land. But what about Gebisa Ejet, an Ethiopian scientist "whose sorghum hybrids resistant to drought and the devastating Striga weed have dramatically increased the production and availability of one of the world’s five principal grains and enhanced the food supply of hundreds of millions of people in sub-Saharan Africa." I would say that he cares more. Wouldn't you?
Posted by Naka and Raj at 8:32 PM