If I Had My Way 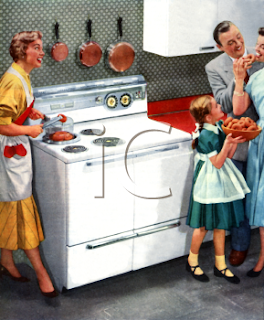 Raj and I have had the opportunity to house sit for our cousins while they are in Europe for some of June and July. I know what you're thinking- we already have a house! But we just had to sacrifice for those 180 degree views of Lake Washington in the nicest neighborhood in Seattle. I know, I know- we're so kind, aren't we? In all seriousness, our cousins have a niiiiiice house. And when I mean nice, I mean think of the nicest house you've ever been to and know that this house is way nicer (unless you've been to Hearst Castle. I suppose that wins). It's even been featured in magazines and such.

Now, I am certainly not one to envy the material possessions of another. In fact, I like my little house and am incredibly happy and content with all I've been blessed with- it's already way beyond necessity. However, there is one room in that house that, if I let myself, I might want really bad. Guess which room....yes, the kitchen.

Our cousin just happens to be a former line chef for the French Laundry (Which she landed without going to culinary school. That doesn't happen anymore). Since her and her husband designed their house from the ground up, she was able to design her kitchen specifically to what she wanted. She did an amazing job. Not only does it make cooking incredibly easy, walking in there makes you want to cook. Of course, it was very personal and not exactly how I would design my kitchen, had I the opportunity to do so. I am, however, taking mental notes of many features that I would like in my fantasy kitchen. Here are some of them:

-Whole house water filter: meaning, you can fill up your cup from any tap and it's pure.

-Industrial gas stove with and indoor gas grill: I have grilled nearly every day that I have been at the house. It's just too darned easy.

-Amazing storage: including cupboards basically built into every wall, and a 8x10 walk in pantry (more like a hallway than a pantry).

-Second prep sink: you can just sweep all your scraps into the sink after you've cut them on your...

-Two full sized dishwashers: oooh the possibilities of entertaining are endless with two dishwashers! You can actually mingle with your guests instead of spending all your time washing.

Other things that would be nice are the built in fridge, amazing views, and all natural materials used to build the kitchen. Oh, and the whole house built in sound system. Yeah.
Posted by Naka and Raj at 3:43 PM

our dreams are so eerily similar...

Luv the blog and recipes. i started my blog about food too not to long ago, check it out.
http://sandiego-goodeats.blogspot.com/