For some time after the year of making thousands of cupcakes a night I couldn't even look at a cupcake without shuddering. Sometimes during that job I would wonder aloud, "Who is eating all these cupcakes and why does everyone want them?!?" Well, this weekend in particular turned out to require cupcakes as perfect special occasion treat, so I rolled up my sleeves and pulled from the back of my brain everything I had tried to supress from my year of cupcakery.

I mentioned before that I had two baby showers to make cupcakes for this weekend. One was kinda Hawaiian themed (ahi tuna on the menu and such), so for that I opted for coconut cupcakes. They were not super fancy looking- no sugar flours or intricate icings- but sometimes the rustic looking cakes can be the most mouth watering. I made a basic vanilla cake and topped them with a mixture of vanilla pastry cream, whipped cream, and toasted coconut. I think I have said this before: mmmmmm. They were pretty perfect, and again I proudly pleased the most particular of palettes. (how's that for aliteration?)

Today was a shower for a baby girl. I topped these cupcakes with adorable flowers. The display was the cutest thing you've ever seen until I bumped the table and half of the cupcakes hit the floor. Oops. Luckily, I was able to get some photos before the "incident." Also luckily, the atmosphere was casual and everyone was good natured about it all. Anyway, I learned my lesson not to perch cupcakes so precariously on cake boards. 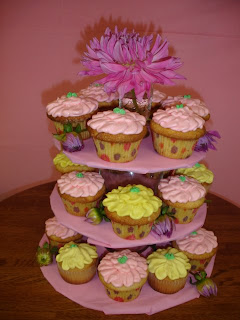 The past couple of weeks have been such a sugar high! I think this week I will try to think of things that are healthier. Eh, I'll try, anyway.
Posted by Naka and Raj at 7:30 PM