Drove up to Julian yesterday for the start of Apple season.

I have to say we were really quite disappointed. First of all it was an incredibly cold and blustery day, dressed in our clothes we were not really too happy- but you can't help the weather.

Next thing, nearly all the apple orchards were not yet open to the public, the one we did find was really none too impressive. Two varieties one golden delicious was pretty good, and one Gala, which honestly was bland and watery. We had fun however, picking the most attractive apples we could find from the trees and filling up our bag right to the brim.

Then we headed off for Apple pie. This time we decided to try the Julian Bakery right in the center of town. They were offering a pumpkin and apple pie. At first I was a little wary but always one to try new things I decided to go for it, whilst the others in my party had the regular Apple Pie a la mode.

My choice was definitely worthwhile. This isn't something I would eat every day, but the flavors went surprisingly well together. The pumpkin was not overwhelming, but more of a subtle after taste. More predominate were the typical pumpkin pie spices, which are always delicious. Funnily enough in fact my pie turned out to be far more satisfactory than the regular apple, which was very heavy on the cinnamon, luke warm and had a very dry and unappealing crust. 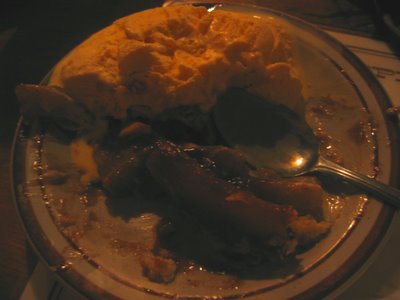